Exploiting the same acoustic communications used to perform networking experiments is a very convenient way to run and control the experiments remotely while on the field.
Our first implementation of a remote control system was performed according to a Master/Slave approach as described in this demo abstract.

Along with DESERT Underwater, we are releasing a new software called RECORDS: a REmote COntrol framewoRk for unDerwater networkS, which substantially re-designs and extends the Master/Slave approach.
This new version of the framework is very modular and extensible, and currently supplies with the interfaces required to control EvoLogics modems of the S2C and WiSE series. It has been already tested and successfully employed for several purposes, including the control of experiments performed during a major sea trial (CommsNet’13) organized by the NATO STO CMRE in collaboration with several international partners.

A paper describing RECORDS, its performance, and its use in real-world experiments has been submitted to Med-Hoc-Net 2014.

You can download RECORDS from our git repository via the following command:

Alternatively you can directly download the source code from here 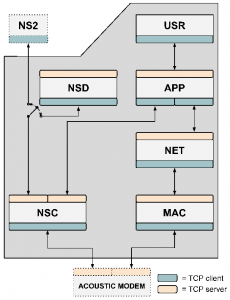